I never cooked pork belly before but I was intrigued to try it since it was on discount at the supermarket.

It’s not the big chunk pork belly usually comes in but it was in slices.

Anyway, I decided to try to cook it very simply with mushrooms and cherry tomatoes.

Literally, it took me 10 min total to make this and it tasted so freaking great.

On top of that, it packs 900 kcal and almost 40g of protein.
I really cannot understand how people struggle to eat enough to gain muscle mass. It’s not difficult if you choose calorie dense food.

Being so low carb and high fat, this is a great keto bulking recipe.
If you are looking to make some keto gains, you should try this recipe out.

On a bulking phase, you increase your calories. On a ketogenic diet, if you are not tracking your caloric intake, it can be hard to gain weight since this diet is very satiating. With some tricks such as adding heavy cream, butter, or olive oil, this can be overcome.

Too many calories for you? Really easy! Just drop the heavy cream! It will still taste great and it will have 132 kcal less.

Still too many carbs for you? Skip the cherry tomatoes or replace the shallot with garlic. The taste will be different but still delicious since garlic goes great with both pork and mushrooms.

This dish not only is super easy and delicious but it’s also incredibly cheap! No excuses for not building muscle mass here! 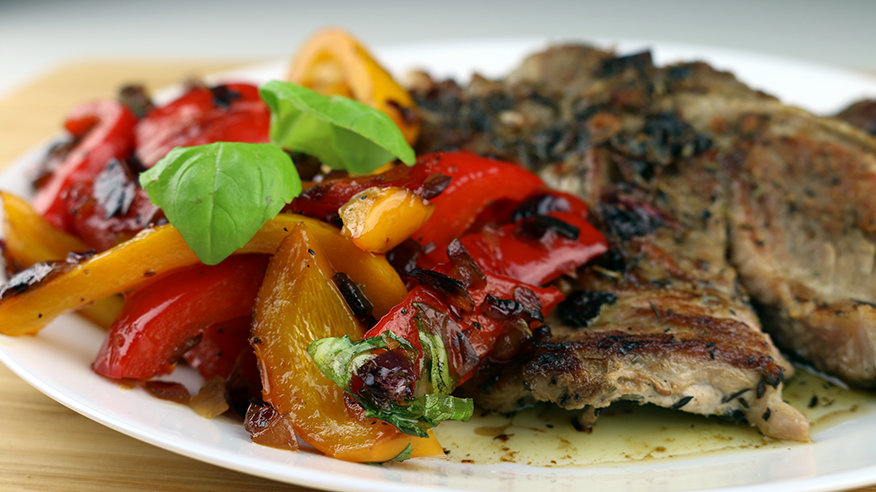 I had never tried a sweet&sour recipe before and if they all taste as good as this one I’m completely sold on the idea.

Quite frankly I wasn’t expecting the taste to turn out SO good.

You have the sweetness of the mango that is counterbalanced by the savoriness and umami of the soy sauce and chicken, ending with the crunchiness and aroma of the almonds.

This recipe is a true melting pot of flavors at each bite.

It was so good that I made it again a couple of days later.

As a sweetener I used erythritol but you can use whatever you want. Its purpose is to help to develop a glaze and add extra sweetness. It’s not mandatory but a very nice addition.

Feel free to omit the almonds if you are cutting. You can also replace almonds with sesame seeds.

This is a high-protein recipe. With 62g of protein per serving, this chicken recipe it’s great for bodybuilding,(especially during a bulking phase) or for those looking to put on muscle mass in general.

You can serve it with a salad on the side or with some mashed potatoes or oven baked fries.

This recipe is recommended for the following diets: primal, paleo, iifym.

You know when you open your fridge and you can find just a couple of ingredients and get discouraged?

That’s what happened to me before making this recipe.

I opened my fridge and I just had chicken and cherry tomatoes.

On top of that, I wanted to make something quickly.

That inspired me to create this one-pot very simple and easy recipe which also takes 10-15 min to make.
This recipe is great for a meal-prep too since you can make it in advance, store in the fridge, and reheat before eating.

It’s very high in protein and so low-carb that even people on the ketogenic diet can make it.

The taste is completely unexpected: sweet from the cherry tomatoes, sour from the wine and garlic, and great savoriness from the chicken blend together to give you a unique mouth-watering experience.

This makes a great post-workout or dinner when you are looking to pack some muscle mass with an high-protein meal.

Besides being Keto, this recipe is also Paleo, Primal, LCHF, and ofc IIFYM.

If you want to add more carbs, pair this with some rice or (oven baked) potatoes fries.

About the wine: it doesn’t to be the expensive stuff. I truly buy the cheapest there is and, once opened, it can last in the fridge basically forever. You can use wine for a lot of recipes to make them even more delicious so it’s not a waste!

If you are short on time and don’t have enough time to cook this keto lunch recipe can be a lifesaver.

This dish is called Caprese. and I’ve been eating it when I was in Italy very often and it was one of my most favorite meals!

Especially if you use buffalo mozzarella and very fresh cherry tomatoes, this can turn easily into a foodgasmic experience 🙂 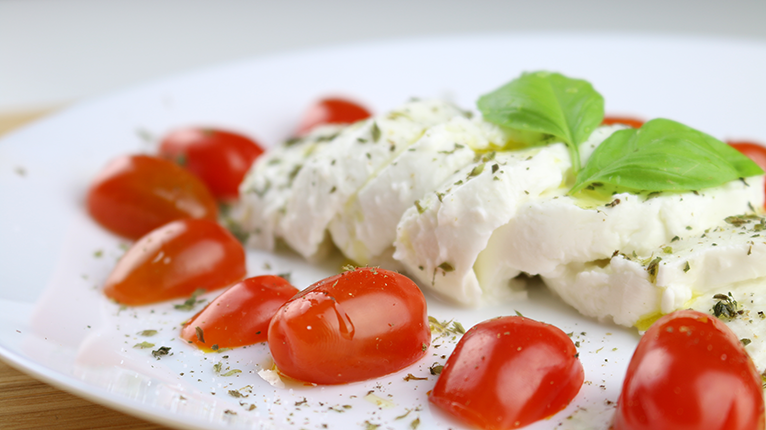 You don’t need fancy recipes to eat well. This is what south Italian cuisine is all about: few ingredients, simple to make, tastebuds ecstasy guaranteed.

This dish is very low carb, therefore, it can be eaten on a ketogenic diet.

It’s also dirty cheap and very quick to prepare since no cooking is involved!

Pork sausage was on discount, therefore I bought 1.5 kg.

What to do with it?

Pork sausage is one of those foods that you can put together with anything and it will taste superb.

This does indeed in this amazing recipe I am presenting to you today.

It’s pretty low in carbs so perfect for a ketogenic diet or low-carb high-fat (LCHF).

If you don’t care about your carbs intake, this goes perfectly with pasta. I had it with some gnocchi and, boy, was this foodgasmic!

Trust me, it tastes way better than it looks 🙂

You know, well, everybody knows that cabbage is good for you.

Right. But that taste…

I wanted to include some green cabbage in my diet and tried to think of how can I make this enjoyable and not a dread.

I thought: Chinese have been using green cabbage since forever and they make delicious stuff out of them!

Since I am not Chinese and I wouldn’t dare mess around with such a complex, rich, and ancient culinary art, I decided to give Chinese cabbage rolls an Italian spin so nobody gets offended. Though if you are Chinese and want to teach me how to make high-protein healthy cabbage rolls, please write me 🙂

So, what makes this dish “Italian”?

Besides the usual aromatics (onion, carrots, leek) I used red wine and fennel seeds. Fennel seeds really give a twist to this dish!

This has only 19g of carbs per serving which makes it ideal for someone on a LCHF diet or keto (when carbs are kept below 50g).

It’s also fairly high-protein. But if you want to increase the amount of protein without increasing calories, go for lean beef (here I used a fatty cut).

This dish can easily be boosted in protein to have 30-40g per serving just by using lean beef.

This dish has less than 500kcal per serving so it can be used for cutting as well (use lean beef in this case which will also increase the amount of protein per serving!)

If I had a broiler, I would have put some Parmesan cheese on top and gave them a couple of mins to become crunchy and even more delicious!

My grandma (and mom) used to make this all the time: a big tradition in southern Italian cuisine.

The flavors are incredible and the way they combine makes you feel in Italy after a first mouthful.

Little that I realized, how high-protein and low-carb high-fat this dish can be!

Therefore, whenever I have some time and can find cheap eggplants, this dish is a must do for my post-workouts.
This is very filling too so if you are cutting you can make it as well.

So, there you have it, the authentic south Italian stuffed eggplants recipe adapted for muscle mass gains!

Have you ever heard of Bud Spencer and Terence Hill? They are famous Italian actors, famous for action-comedy movies such as “They Call Me Trinity”.

In this movie, there is an epic scene of almost 3 minutes in which the main character is eating a delicious beans course straight from the pan.

The scene is so well done that you start drooling right away.

I tried to imagine how that recipe would be like and went about to re-create it. t was as delicious as in the movie.

It was as delicious as in the movie it seems to be.

This is a healthy, high-protein, low-carb recipe which is great for building muscles!

If you want to be as strong as Bud Spencer, you should try this recipe. It’s super easy!

This recipe is also gluten-free.

How to make a cheap, (fairly) healthy, and high-protein dinner?

Well, you use pork, legumes (lentils in this case), and veggies!

This recipe is a great high-protein lunch/dinner idea since it packs a lot of proteins and a ton of fibers (for those of you struggling with fiber intake!). It delivers an incredible 38g of fibers per serving. If I remember correctly that’s the recommended intake for an adult male!

While being all good for your intestinal health, it’s also very delicious as the aroma of the pork meat perfectly combines with the texture and taste of lentils and tomato sauce. Then, the added spices add a touch of unexpected flavor that blends delightfully with the whole dish.

It’s not a quick recipe (it might require up to 50 min), mind you, since you have to cook the lentils but if you have a slow cooker than it’s perfect!

Since this is a high-calories recipe, it’s ideal if you struggle to gain weight and muscle mass.

This recipe is good also for people on the slow-carb diet!

The amount of carbs in the label is net carbs (as in European nutrition labels’ style).